One Year On — A Genuine Impact Retrospective Part One 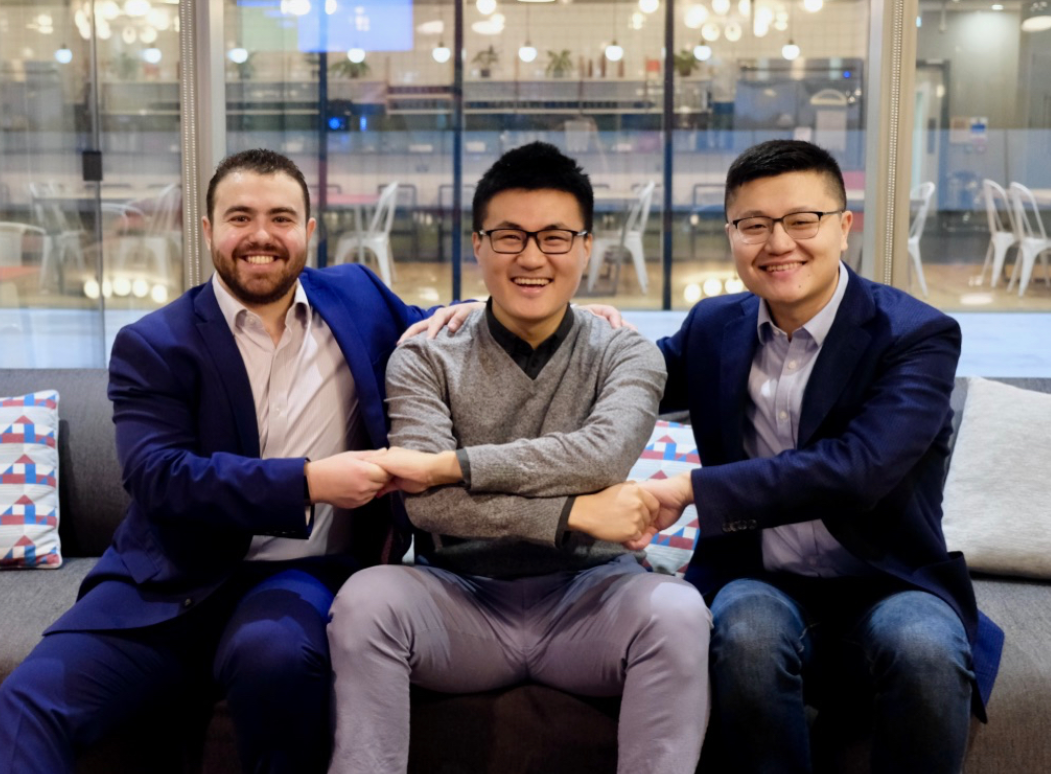 August 22nd 2018, noon in Canary Wharf inside Black Sheep, that is when I first met our CEO Truman Du.

A short way of wrapping up would be to say “the rest is history”, however I’ve been with Genuine Impact for 366 days now and it seemed a fitting time to give a recap of what we have achieved but also the decisions made along the way.

It’s amazing how fast a year has flown by, but even more incredible how much our tiny team has achieved in such a short space of time.

In this post I’ll share some never before seen screenshots and also highlight some key changes we made along the way. It’s amazing to compare the first ever drawing of the Genuine Impact app versus what we are working on delivering today.

A common question we get asked is how did the three co-founders meet? As with most things in life, it all comes down to luck and being in the right place at the right time. I had recently quit my job as a Product Manager for JHC, a financial software firm, and I was interviewing with a few companies and generally enjoying having a bit of a break for once.

My friend Yuchen asked how I was getting on and what I was looking for, I explained I wanted to go back to the startup world and really make a difference, to have an impact. He suggested I meet with an old friend of his from his Blackrock days. Thus the meeting was setup.

I was a little surprised to get my free coffee from Truman and have an NDA handed to me at the same time, however I had faith in Yuchen and we started chatting.

If you are wondering what the first drawing was that Truman showed me, here is a screenshot from the PDF I saw.

It’s funny looking back at these very early stage designs and ideas to see what radically changed and what ended up being implemented.

The bottom line was, I loved it. The passion, the idea, the drive. What started as a friendly introduction quickly became something we all wanted to foster. Truman had been working on the idea for a few months and done some research, created some designs, and was already dedicating himself full time to this business.

After sitting down with Truman one more time, myself, Yuchen, and Truman all agreed we would make this happen. September 1st 2018, this would become our new life.

Ever been to a cafe or coffee shop and you see loads of people sat down working? Between September and December 2018, that was us.

We were meeting in Canary Wharf, Le Pain Quotidien, this would be our home for most of 2018 as we sat down to compare notes and ideas before heading back home to bring this idea to life.

The staff were very accommodating despite the six hour long sessions where we ordered a few coffees and croissants. We all worked from home and then met in Canary Wharf to give each other face to face updates.

Working hours were flexible as we all worked from home, however it made communication tough not knowing when people were available, thus the Sunday meetings. No matter how many WhatsApp calls, Zoom dial-ins, Slack chats, or Google Hangouts, we always had a productive face to face meeting.

We setup Slack in the early days (4th of September 2018 to be spot on) and it’s usage has only grown to become our main channel of communication.

Looking back this culture of being output focused, make sure we deliver and keep people updated, is something we have kept. I don’t think we could have lasted the first few months without our own independent drive and focus, as well as the willingness to evolve our ideas, at the same time as prioritising the product.

These first few months would be extremely intense and by the end we had reached an agreement. We would build the MVP and then raise funds. The clock was already ticking.

Early on we decided that building an app would be the best way to get our product in the hands of our customers and begin collecting feedback as quickly as possible. Building a solution that works for everyone could cause us to divide our attention, we wanted something our customers could quickly access and always have on hand. The two options were to build a website or to build an app. No matter what route we would go down, we wanted to make sure we had mobile at the front of our minds.

Truman has already got the basic designs down and we used the same agency that helped with our logo to create the first prototypes in Zeplin and Invision.

In the early days we had a very different vision for the app. We were heavily focused on insights, collecting the best financial news and analysis from across the globe. Next we had our fund and then stock algorithms, we would split this to our “top picks” and the rest of the investable universe. Lastly we had our newsletter which included our own Genuine Impact insights.

These prototypes were invaluable. I can’t tell you how useful it was to take this interactive version of the app to investors and customers, to really understand what they thought.

No longer was this an idea inside Google Drive or photos of drawings, we had something to test and talk to people about.

However, we still had to build it. Thus the first major decision was upon us.

If you are using the app today this will slightly ruin the surprise, however if you are reading a retrospective that is going to happen.

We had to make a decision, do we build a native app, or a web app. There are other hybrid blends, and other technologies that bridge the gap, however we needed to get moving and settle on two different options.

In the end we decided we wanted quality above quantity. We would dedicate ourselves to an iOS app and have it built as a native solution. We wouldn’t have the time or money to build both iOS and Android for day one, but we needed to get a MVP together.

We started work on building a backend and the progress was slow. We setup two streams of work, building the algorithm and creating the APIs.

As November approached, we released we couldn’t achieve this alone. The project was too big and we needed broader skill sets for shorter periods of time.

It was time to consider using an agency for the build.

In late November we found the perfect partner, the agency we had been using for the designs turned out to be best placed to help build out the app. While speaking to them we discussed the possibility of them taking over more of the work.

To our surprise they could deliver the whole project in a short time scale, however it would mean a switch to a webapp rather than a native solution for iOS. The desire to release the app on iOS and Android for day one, and reusing a lot of the existing web development skills was very strong, but the risk was present. It was time for another big decision.

The existing code was scrapped. The agency would develop a webapp and we would define the priorities for them. Meanwhile the first versions of the algorithm were coming together.

23 pages of feature specification was written up. This is what the agency would attempt to deliver for us. Even looking at the early drafts of this document we still had a lot of unknowns, and more would change as we started work.

The agency would start work in December and work through Christmas. However, our window was short. We needed to define the prioritisation before the work began.

It was time to sit down and make some tough decisions. Meeting in Taylor St by South Quay I presented the first version of our technical prioritisation. We had to be strict, and we had to reach an agreement, if time is getting short or complexity is increasing what do we drop and what is absolutely key.

Together we worked through all of the items, every single feature we were thinking of, everything from design to functionality. We gave it all a label.

For the product to be ready to launch every “Must” needs to be completed, from there everything else had a lower priority. We still use the MoSCoW method of prioritising within the business, however this was our first ever time using this and really picking apart Genuine Impact.

The end result was a picture of a leaner version of our app, focused on what really mattered to our customers.

What really mattered to our customers had in fact changed, the early days of our app was heavily focused on insights.

When we showed the prototype to more people, spoke with more investors, and even while working with the agency we came to another realisation. Insights wasn’t the killer feature, our ranking algorithm for stocks and funds was.

We dropped insights down to a “Could”, and said if we get one feature right it has to be our rankings.

The agency had a few weeks to get themselves setup and ready to tackle the project. We had the spec, the prioritises, and our first extracts from the ranking algorithm.

In the new year we wanted to start speaking to investors not as an introduction but to kick off the fund raising, this meant we needed more than a prototype, we wanted an app they could download from the app stores and see on their own phone.

Over Christmas I was staying in a hotel visiting family, we had just got a laptop so I could work while on the move and stop using my home PC. The agency had delivered the first few sneak peaks. Even with the aggressive timeline of a few months and over the Christmas period we were making progress.

As 2019 crept forward we decided we needed to ramp up our output. We worked best when we were together, the time had come to move away from working alone and getting us in the same room more consistently.

We had used the WeWork in Moorgate before, Yuchen had a small office he liked to work from and it made sense for us to all move in. We ended up with two small one desk offices in Moorgate, between the three of us we would test and grow the app from those small glass cubes.

It was also time for another big development. We needed a website and this is what we started with.

Our website has changed over time, the biggest changes have really been around the messaging and finding the right purpose for our site.

With the website now live, new office space sorted, it was time to get our hands on the app.

Tomorrow I’ll update with the thrilling conclusion to this retrospective. 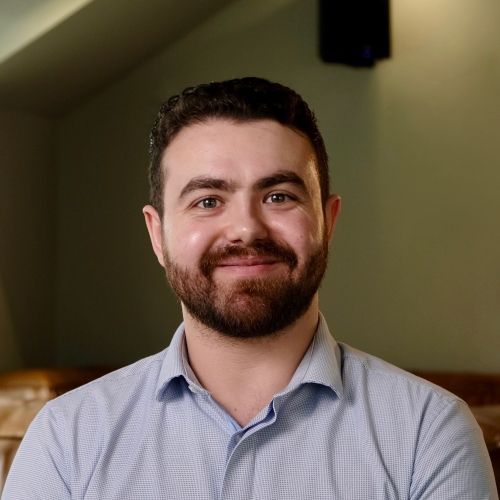